Hitaste P5, launched in 2018, is the first IQOS compatible heat not burn device that can adjust the heating temperature, heating time and attached display at will. Later, the extra-large HiTaste P6 was introduced，why it is launched is because the battery capacity is increased, and the battery can be continuously charged. Using 24-29 sticks can meet most people’s needs for going out in a day!

Hitaste P8 heating device was launched in 2020. The appearance is mainly changed to a metal shell, and the inside is newly added with “double heating”. Besides heating by the heating needle, a heat transfer surface is added at the bottom to implement “inside and outside clamping”.

The Hitaste P8 HNB heat not burn tobacco cigarette heating device weighs about 98 grams, which is a little heavier than the 82 grams of the previous generation P6. It may be a little heavier due to the use of a metal casing.

In terms of contour modeling, HiTaste P8 heat not burn tobacco heating device comes with multiple side waistlines and a little more three-dimensional effect, but it is not as smooth and comfortable as LIL SOLID PLUS in the hand.

Another improvement of Hitaste P8 is the use of USB Type-C charging connector. In fact, as early as the end of 2018, when IQOS launched IQOS 3 & IQOS 3 MULTI, it has already switched to Type-C interface. Today, new mobile phones have switched to Type-C. It is much more convenient to find a charger and charging cable when charging.

Compared with the P6, the P8 HNB tobacco cigarette heating device comes with an extra dust cover. It is not so much a “dust-proof cover” as it is a “fouling-proof cover”, because its actual function is not to prevent dust from entering, but to prevent the shredded tobacco inside from falling out, and to reduce the “smoke smell” inside.

HiTaste P8 heating device structure deconstruction
The overall structure of HiTaste P8 is similar to that of P6. The battery in the lower half is not much different from the display. The biggest change is the heating chamber and heatstick holder in the upper half of the device. 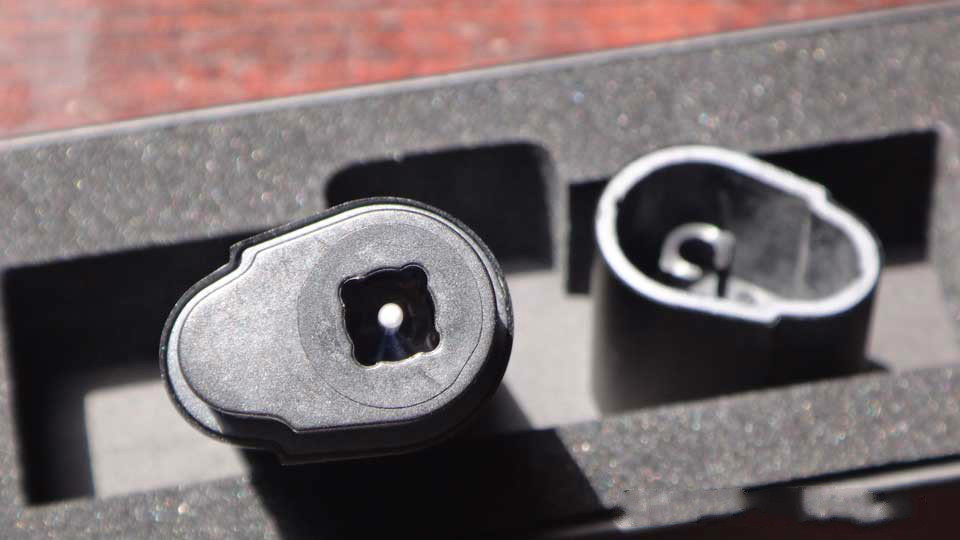 The heating chamber of HiTaste P8 is relatively narrow to replace the heatstick holder，that is why daily cleaning is a bit inconvenient.

If compared with LIL PLUS, if you remove the upper cover and heatstick holder, you will find that the circular heating chamber of LIL PLUS is a bit larger and has no pits, which is much more convenient for daily cleaning.

One of the selling points of HiTaste P8 is the “double heating” with bottom heating. Besides heating the middle heating needle, it will also transfer heat through the metal ring at the bottom to increase the heating area.

Comparison of heating effect of HiTaste P8 vs LIL PLUS

Performance data test of Hitaste P8 heating needle heating smoke integrated machine
This time the P8 battery capacity has been increased to 3200mAh. As for the endurance of the actual application, the actual measurement shall prevail.

In order to have a reference guideline and compare with LIL PLUS, the heating time of HiTaste P8 is adjusted to 4 and a half minutes, the heating temperature is set to 270C, and then P8 is fully charged for testing.

The test result shows that HiTaste P8 can be used continuously for 25 times after being fully charged. If the temperature is lowered to 260C and the test is repeated, only 25 heatsticks can be smoked.

The battery capacity of HiTaste P8 is 3200mAh. Compared with the LIL PLUS which only has 2900mAh, LIL PLUS can easily smoke 30 or more! ?

It is estimated that there may be several reasons. First, the dual heating of HiTaste P8 increases bottom heating and power consumption; the second reason may be that the P8 power management system is not superior to LIL PLUS; third, it is possible that the battery performance of P8 is not as good as that of LIL PLUS…

The operating software and functions are the same as Hitaste P6, there is no surprise, because some users of “hnb addiction” tend to have a lighter taste similar to LIL PLUS, which is more “ventilated”, if the bottom heating is added, the smoke smell will be stronger.

The only fly in the ointment is that the new Hitaste P8 still does not come with lock function.